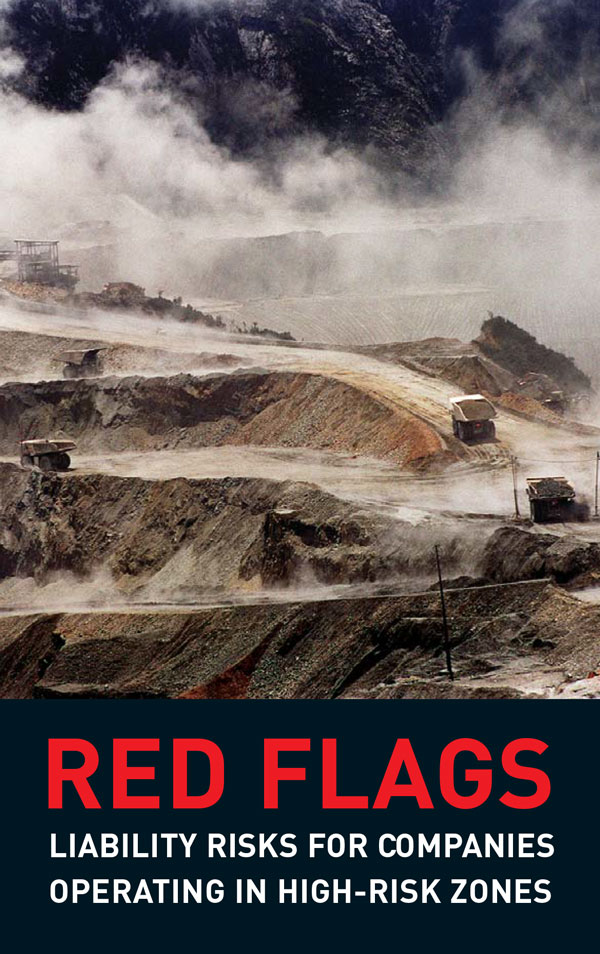 The contents and documents of this web site are intended for learning purposes only and do not constitute legal advice or opinion. www.redflags.info is not responsible for the content of external internet sites.

Since the launch of Red Flags in May 2008, several cases have emerged confirming the significance of the original list of nine Red Flags to watch out for. Links to these have been provided in the news updates in the right hand margin in each Red Flag. Also, divestment decisions, regulatory actions or policy development which attempt to grapple with the problems identified by each Red Flag have also been noted.

At the same time, developments since May 2008 suggest the emergence of additional liability risk and the need for a tenth Red Flag.

A Swiss-based multinational company was sued in U.K. courts by 30,000 people in connection with health affects suffered as the result of the dumping of toxic waste in Cote d’Ivoire in 2006. The case was settled out of court in October 2009.

A U.S. oil company is being sued in Ecuador in connection with the pollution of water systems in a rain forest region inhabited by indigenous peoples. The case was initiated in the U.S. but is in its final stages in Ecuador.

A Dutch-U.K. company is facing a law suit in a Dutch court for alleged negligence related to oil spills in Nigeria. An environmental group and four Nigerians brought the case. The court ruled the case addmissable in late 2009 and the case is proceeding.

The subsidiary of a A U.S. based company was convicted in India along with seven of its employees in connection with a leak of thousands of tonnes of chemicals from a pesticide plant in Bhopal, India. Amnesty International reports that “Between 7,000 and 10,000 people died in the immediate aftermath and a further 15,000 over the next 20 years.” More on the Bhopal case here

A French court has ruled that it will allow a complaint to be heard against two French companies for their role in building a tram line in East Jerusalem, which is part of the occupied West bank. The companies have challenged the claims and the cases are pending.

Two Canadian companies are facing law suits in Quebec courts for their role in the construction of the settlements in the West Bank near the Palestinian town of Bi’ilin in alleged violation of Article 49(6) of the Fourth Geneva Convention, which prohibits an occupying power from transferring its own population into the territory occupied. A Judge dismissed a case against two Montreal companies in late 2009. Both sides are appealing the decision.

The Red Flags assume the common principle that everyone is innocent until found otherwise in a court of law. With that in mind, all cases in the Red Flags pamphlet and web site are referred to as examples of liability risk and do not imply any position as to the charges or complaints filed.

As noted in the description of the Red Flags web site, the principal criteria for selection as an example of a Red Flag risk has been whether the substantive allegations are illustrative of fact patterns which current case law in a number of jurisdictions indicates may give rise to some form of legal action. It is those fact patterns which companies should seek to avoid.

In this sense, a risk of liability is defined here as the potential for litigation. This is not a legal definition, but an operational one intended for use by companies in their risk management.

The Red Flags assume that the law is evolving. Cases referred to by the Red Flags guide have concluded as convictions, acquittals, and out of court settlements. Several are still ongoing or have yet to move to trial. In practice, these cases are typically very complex substantively and procedurally and include numerous claims and allegations, not all of which may be substantiated. Also, sources of law are complex and will vary across jurisdictions, further complicating the task of drawing lessons from comparisons between jurisdictions.